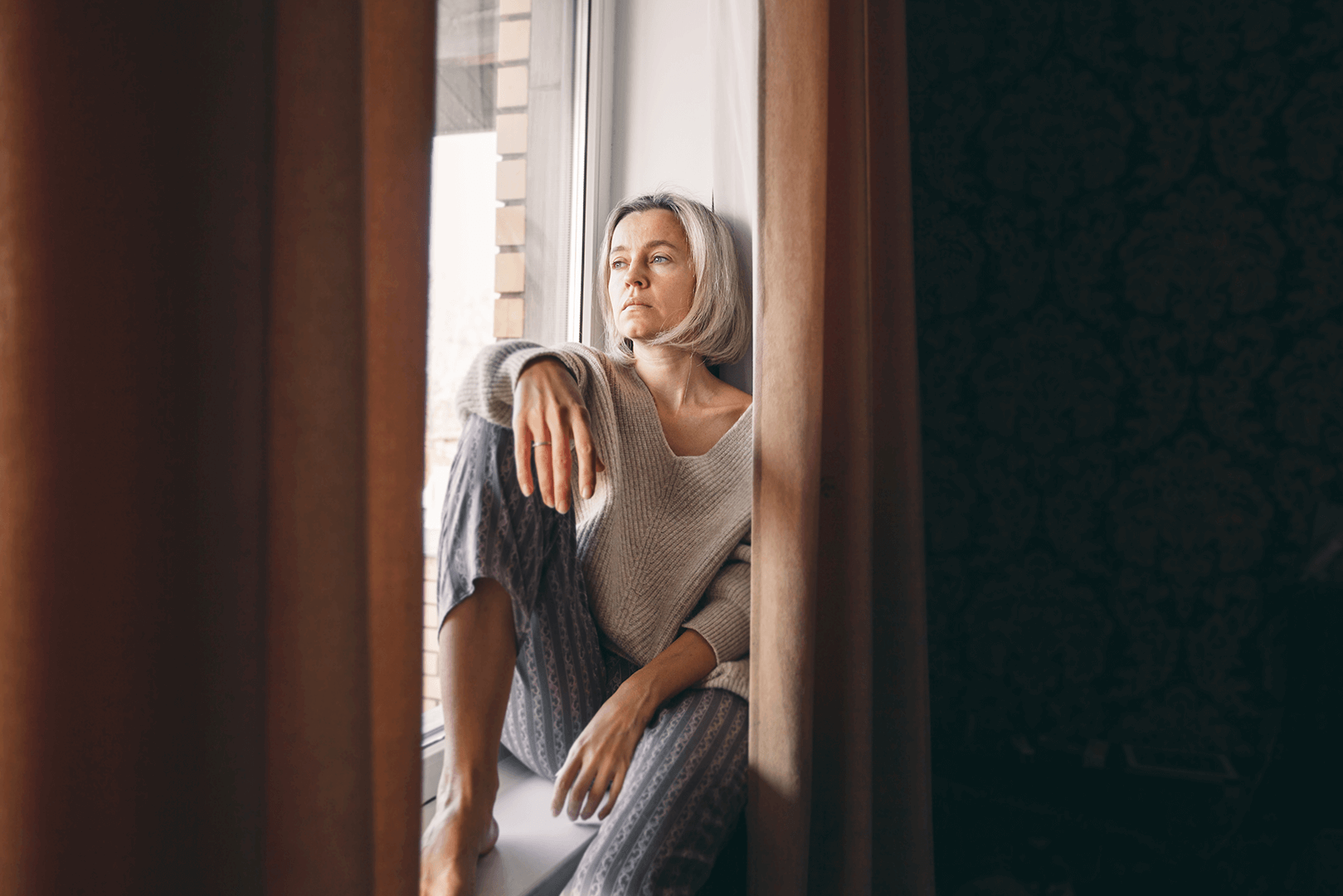 Finding the best treatment for depression is a lot like making the best version of your favorite dessert. You might start out with a basic recipe for apple pie, but, based on your preferences, you might add extra cinnamon, reduce the amount of sugar, or squeeze some lemon juice on top to add tartness.

Just as you adjust the ingredients to find the perfect blend for your signature apple pie, your doctor will likely need to adjust your antidepressant medication to not only find the perfect treatment for you, but to also clarify your diagnosis over time. Because of this, it’s important not to feel discouraged if your symptoms aren’t totally gone after a few weeks of a single treatment.  In some cases, that may happen; but in many cases, it may take months or years to fully clarify all diagnoses and/or achieve the perfect combination of medicines, therapist and lifestyle modifications to allow you to live your best life.

One landmark study that drives this message home – particularly as it relates to medicines – is the Sequenced Treatment Alternative to Relieve Depression (STAR*D). In this article, I look closely at this study and how the results have helped guide doctors in finding an effective medication regimen for their patients suffering from depression.

The Sequenced Treatment Alternatives to Relieve Depression (STAR*D) study is a large-scale trial funded by the National Institutes of Health. It is the largest and longest open-label, pragmatic trial ever conducted to study the treatment of major depressive disorder (MDD). Over a seven-year period, the study enrolled 4,041 outpatients, ages 18-75 years, from 41 clinical sites around the country. The results of the study were published in 2008.

The goal of STAR*D was to test the effectiveness of both medication and cognitive behavioral therapy, and to determine whether certain treatments were more optimal after one or more failed trials. Subsequently, STAR*D has become an important cornerstone in the study and treatment of depression.

What You Need to Know About STAR*D

STAR*D had four levels testing different medications or combinations of medications. The primary goal of each level was to determine whether the chosen treatment could effectively treat participants’ MDD. Those who did not become symptom-free at one level could continue to the next level.

The design of STAR*D reflected what we do in clinical practice because it allowed study participants to choose the treatment strategy most acceptable to them and involved only limited randomization. Let’s take a closer look at the method and results.

Level 2 was designed to help determine an appropriate next treatment step if the first step did not work. Thus, in level 2, participants had the option of switching to a different medication or adding on to their existing citalopram.

Those who joined the “switch” group were randomly assigned to either sertraline (Zoloft), bupropion-SR (Wellbutrin), or venlafaxine-XR (Effexor). These medications were chosen for comparison because they represent three different types of medications. Sertraline is an SSRI, the same class as the citalopram used in level 1. Bupropion belongs to another class of antidepressant medications that work on different neurotransmitters than SSRIs. Venlafaxine is an SNRI: a class of medicines that are very similar to SSRIs in terms of their efficacy and side effect profile, but with minor differences – and those differences may make them a better fit for some people.

Those who joined the “add-on” group were prescribed either bupropion-SR (Wellbutrin), or buspirone (BuSpar).  Neither of those two options are SSRI’s, but either options is safe to add to SSRI’s.  The main differences: Wellbutrin is more stimulating, energizing and treats depression but not anxiety; whereas Buspar treats both anxiety and depression.  Participants could also switch to, or add on, cognitive psychotherapy. 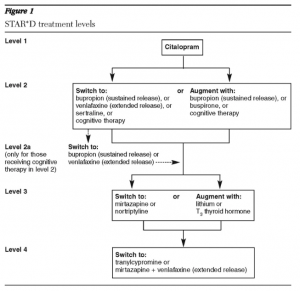 In level 3, participants again had the option of either switching to a different medication or adding on to their existing medication. Those who chose to switch their medication were randomly assigned to either mirtazapine (Remeron) — a different type of antidepressant — or to nortriptyline (Pamelor) — a tricyclic antidepressant — for up to 14 weeks. Both work differently in the brain than the SSRIs and other medications used in levels 1 and 2.

In level 4, participants who had not become symptom-free in any of the previous levels (and therefore considered to have highly treatment-resistant depression) were taken off all other medications and randomly switched to one of two treatments — the monoamine oxidase inhibitor (MAOI) tranylcypromine (Parnate) or the combination of venlafaxine extended release (Effexor XR) with mirtazapine (Remeron). These treatments were chosen for comparison because previous research had suggested that they may be particularly effective in people who had not received sufficient benefit from other medications.

In level 1, about one-third of the participants reached remission (i.e., became symptom-free) and about 10-15% more had a “response” (at least 50% reduction of symptoms from the first appointment), but did not reach remission. It took an average of six weeks of treatment for participants to improve enough to reach a response (at least 50% reduction of symptoms) and nearly seven weeks of treatment for them to achieve a full remission of depressive symptoms.

In the level 2 switch group, about 25% of participants became symptom-free. All three of the switch medications performed about the same and were equally safe and well-tolerated. In the add-on group, about one-third of participants became symptom-free. The rates of remission and response were similar between the buspirone and bupropion add-on treatments. 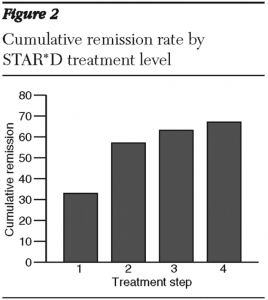 In the level 3 switch group, 12-20% of participants became symptom-free, and the two medications used fared about equally well, suggesting no clear advantage for either medication in terms of remission rates or side effects. In the add-on group, about 20% of participants became symptom-free, with little difference between the two treatments. However, the T3 treatment was associated with fewer troublesome side effects than lithium.

In level 4, 7-10% of participants became symptom-free, with no statistically significant differences between the medications in terms of remission, response rates, or side effect burden. However, those taking the venlafaxine-XR/mirtazapine combination experienced more of a reduction in depressive symptoms than those taking the tranylcypromine.

How Does STAR*D Differ from Other Clinical Trials?

Unless you’re a scientist, you may not be familiar with the research methods used to study medication and other psychological treatments.  Prior to STAR*D, most randomized clinical trials (RCTs) that studied antidepressant efficacy had recruited participants through advertisements, and often intentionally excluded people if they were taking non-psychiatric medical medications, had chronic medical conditions, had other psychiatric conditions alongside depression, or had current suicidal ideation.  STAR*D was a nationwide study that recruited patients who had previously been diagnosed with major depressive disorder (MDD), and instead of putting out a general call for participants, STAR*D patients were referred to the study by their doctors.  The study had fewer exclusionary criteria, so instead of studying a “sanitized” population of patients with no complexities outside of their depression, they saw a population that more closely resembled what is seen in real world practice.

In addition, clinicians recognize the importance of patients’ preferences when it comes to deciding between different treatments with similar effectiveness. Allowing patients to be involved in the selection process may lead to better outcomes. However, the completely random design employed in RCTs does not take into consideration patient choice and may, therefore, limit the generalizability of results.

STAR*D addressed this issue by dividing patients into groups based on the treatments they are willing or unwilling to accept. This allows for randomized comparisons (across groups of patients who opt for the same range of treatments), while simultaneously allowing patients to make choices based on their preferences.

Another significant difference is in most clinical trials of treatment for depression, the measure of success (outcome) is called “response” to treatment, which means that the person’s symptoms have decreased to at least half of what they were at the start of the trial. In STAR*D, however, the measure of success was a “remission” of depressive symptoms—becoming symptom-free.

Finally, STAR*D more closely mimics the real world by revealing the medicines being used. By definition, traditional double-blind RCTs conceal the identity of the treatment from both the participants and the treating physicians to avoid bias skewing the results. Further, if an RCT is placebo controlled then patients and physicians are unsure of whether patients are receiving an active therapy. STAR*D made the treatments known to both patients and doctors, while minimizing bias by keeping the independent outcome assessors blinded to the therapy.

What Did STAR*D Teach Us About Treating Depression?

This study helped us understand the likelihood of remission vs response vs lack of response/intolerance of the following different levels and treatment strategies:

From the information gathered above, the study arrived at two key conclusions.  The first is that many people who do not achieve remission or response within the first few weeks of a treatment may do so by the end of 14 weeks, and more will do so by the end of the second treatment step.  The second conclusion is that there were no statistically significant differences in remission rates between treatments in the same level.

What Did STAR*D Teach You, Dr. Eappen?

STAR*D was probably the most important piece of literature I referred to throughout my internship and residency training.  It helped guide me on which treatments to recommend when evaluating a patient for the first time.  It helped guide me on how long to give each treatment before considering a new one, and if the latter was considered, it helped me understand the pro’s and con’s between the various “add-on” and “switch” strategies mentioned in the study.  Although I don’t replicate the study exactly as it is outlined in my current practice (i.e., I don’t start everyone on citalopram, I don’t offer the exact same seven subsequent treatment options seen in Level 2), the influence of this study is easily seen in my daily practice.  It helped me emphasize a) the importance of giving each treatment option at least 8 weeks at the highest tolerated dose before considering it a treatment failure, b) the importance of adding the support of a dedicated therapist to our treatment, c) the risks, benefits and similarities between various “add on” and “switch” strategies for those who did not remit to the first treatment.